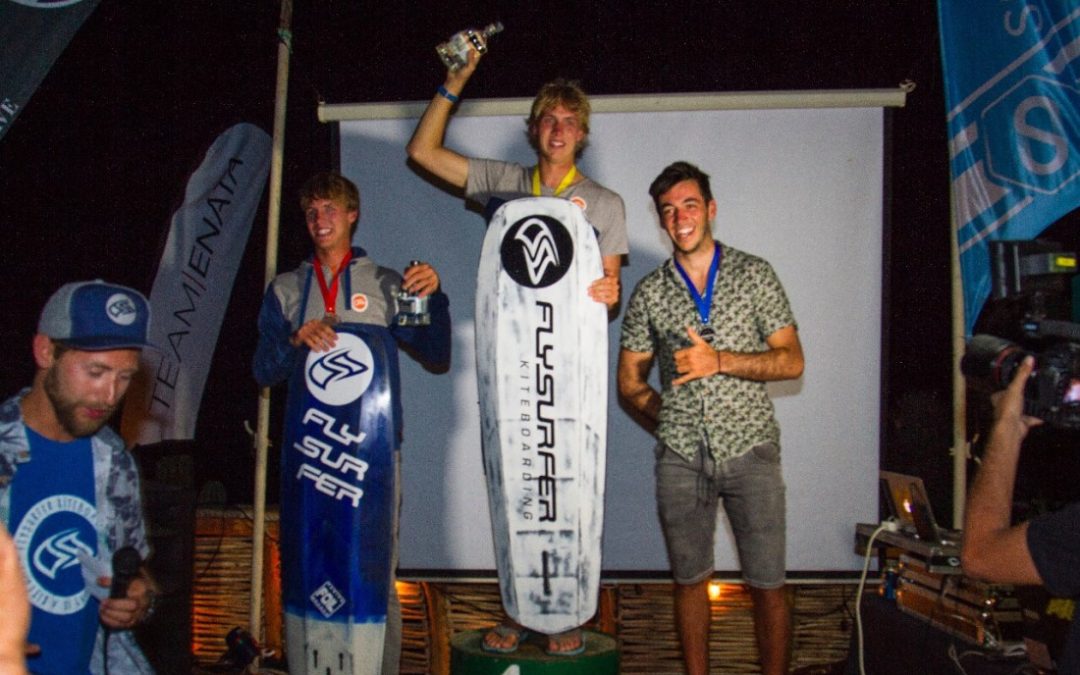 FLYSURFER Kiteboarding crew and riders where in full force in La Ventana, the small Mexican watersports town, famous for its beautiful weather and reliable winds. And a well known winter escape for many kiteboarders from the USA and Canada.

Just before the 1st stop of the 2018 HydroFoil Pro Tour event in Mexico, FLYSURFER kiteboarding held their annual sales partner meeting at La Ventana Beach Resort, meaning our development and sales crew where on the spot helping out our partners with the latest FLYSURFER kiteboarding gear and interact about products, the brand’s future and receiving precious feedback from partners and teamriders.

The meeting was a great succes and left an amazing vibe with our crew, riders and partners, during the last 2 days our race team went in full preparation mode for the upcoming important first event of the season; the HydroFoil Pro Tour stop number 1, with 55 competitors from 20 nations this was shaping up to be one major battle.

Day one of the HydroFoil Pro Tour kicked off at 9:00am sharp with a skippers meeting at La Ventana Beach Resort, this years event host. The wind filled in at around 1pm, with a light breeze of 7-11 knots, a mere 1 knot above minimum wind speed. While the course was being set, FLYSURFER riders picked out their quiver, ranging between 15 and 21 meter SONIC RACE kites.
Race 1 was very challenging as the wind shifted frequently from North to East. This was not only tricky for the race director, whose goal is to set the best course, but for the riders as well. Most competitors spent the windward leg on port tack, and starboard on the downwind legs. This was perfectly executed by the leader Axel Mazella, who broke away fast from the remainder of the fleet. Axel was followed by FLYSURFER Kiteboarding rider Olly Bridge in second (FLYSURFER) and Florian Gruber in 3rd (FLYSURFER) both on SONIC RACE kites.

Race 2 provided steadier winds, which allowed for a more square course. The first leg was lead by Olly Bridge (FLYSURFER) and Nico Laundauer. Olly held his ground strong while Nico was surpassed by Guy Bridge (FLYSURFER) in 2nd and Riley Gibbs in 3rd.

Olly and Guy Bridge pulled a stellar FLYSURFER and #teambridge effort claiming pole position after raceday one. The hopes of races 3 and 4 quickly dwindled as the wind backed off for the remainder of the day. After a windless second day the anxiety started to build for the upcoming of the event.
Day three kicked off bright and early with a standard 9:30am skippers meeting. The riders gathered around with fingers crossed, hoping for more wind. The wind gods delivered a breeze, albeit quite light and shifty, but nonetheless enough to hold 4 races. 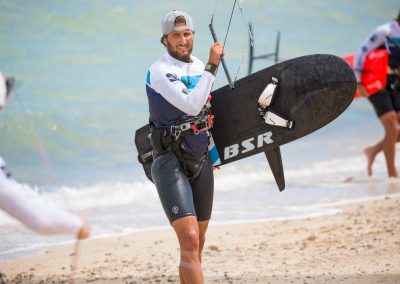 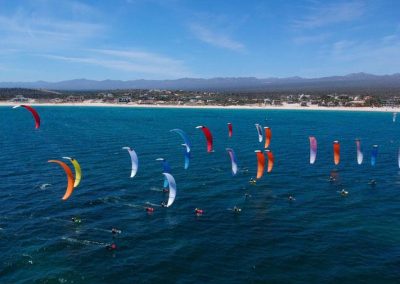 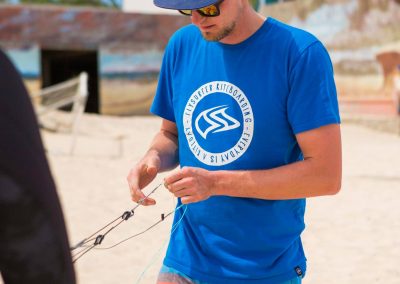 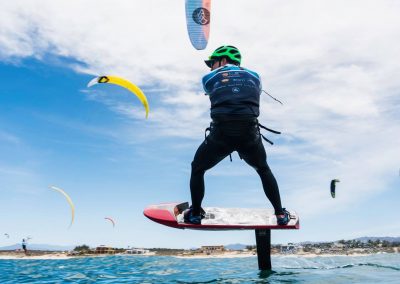 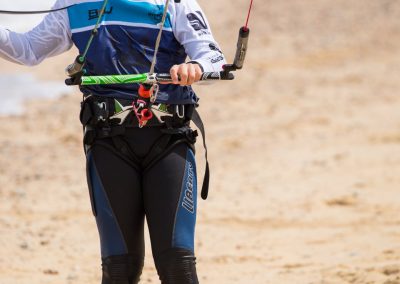 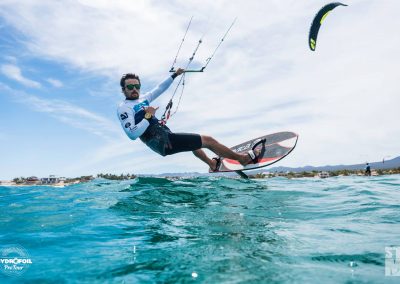 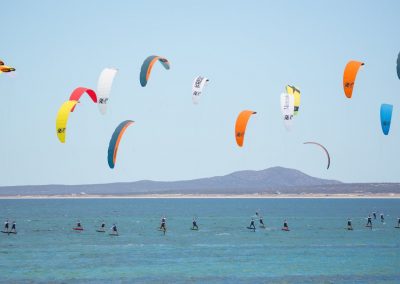 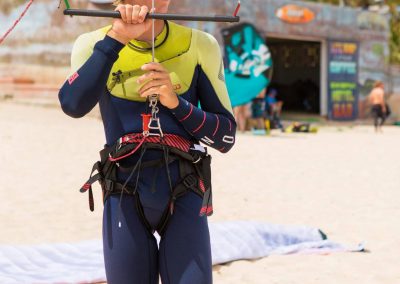 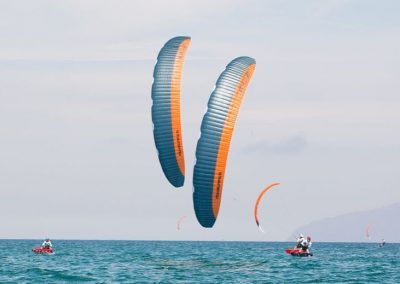 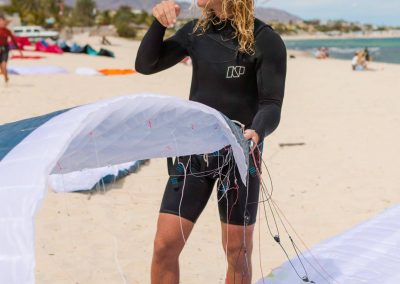 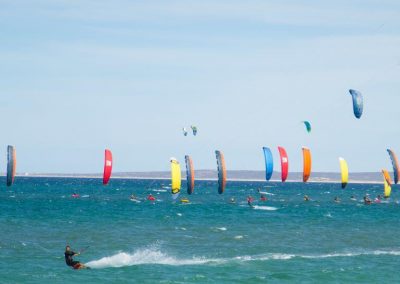 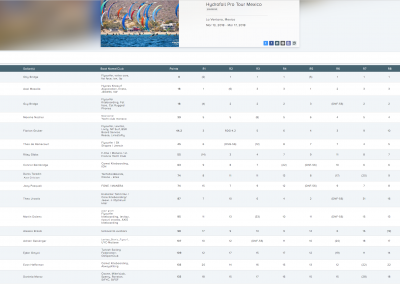 Race 3 provided the most steady winds, and riders set out eager to compete with a 12:15pm Start. The winds were very shifty as they rounded the top mark. The majority of the fleet completed the course successfully, with another sweeping win from Olly Bridge (FLYSURFER) for the men, and Daniella Moroz for the women.

Race 4 began shortly after with mostly steady winds. Competitors continued with big kites ranging between 18m and 21m. As the race progressed, the wind began to shift more easterly, and riders began to struggle. Nonetheless, the course was completed by most, with another win for Olly. Race 5 was similar in nature, but Olly gave way to Axel Mazella, who took the win.

While the weather continued to be unreliable, the call was made to hold one last race of the day. This was definitely the most difficult run, as the wind came strictly from the East, and decreased in strength throughout the evening. Riders had a tough time getting off the beach, as the wind began to retreat. Roughly half the fleet was able to make it back to shore, while the others patiently swam in or waited for boat assistance. Again, Olly proved to perform best in these shifty conditions, taking the win yet again.

The classic El Norte finally arrived on day four providing strong winds and solid racing. For the first time all week, the races were able to start on time with all riders at the start. The first 3 races were held back to back, averaging about 13 mins in duration.

The final race (#10) came into place during which the wind and swell continued to ramp up where even the committee boat started to have problems. This tested the racers ability to hold down their powerful kites, Olly Bridge on his 11.0m SONIC RACE lead the way for another win, followed this time by Axel Mazella and Guy Bridge (FLYSURFER). These past few days were no easy feat for the racers, but they proved to show strength and ability in both light and strong conditions.

After 10 exciting races, team FLYSURFER saw great dominance on the final result sheet, with 5 out of the top 6 riders on SONIC RACE kites, the winning potential of this kiteracing kite could be clearly seen. Compliments to all our riders for their commitment and amazing performance!