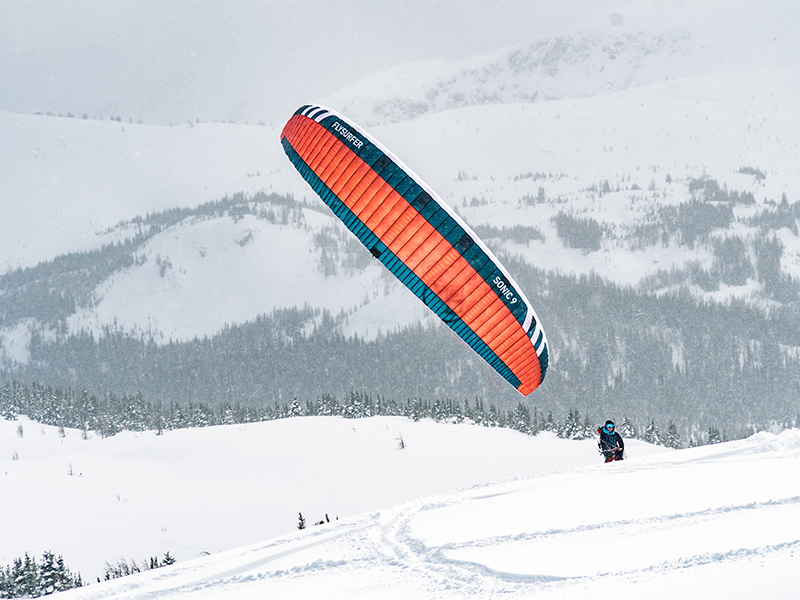 A warm welcome to all Flysurfers and those who want to become one. The snowkiting season is in full swing, so we sat down with the Canadian Marie-Eve Mayrand. She tells us how to survive a long winter and why the SONIC is your first choice for snowkiting competitions and how much fun she has riding it.

Living in Canada, we learn to make the most of our long winters, which can last five to six months. Me, I snowkite a lot. The Canadian Rockies and Alberta’s open prairies are my training ground. It is where I prepared for my three-time participation in the Red Bull Ragnarok (Norway), in VAKE (Varanger Arctic Kite Enduro), in RedBull Kite Farm (Canada), and in several local races.

Mountain winds are cold, unpredictable, blustering and changing. Thin bridles used on race kites can be tricky on snow. I have had many troubles because of bridles that became frozen, bridles that were caught on ice or hard pack snow, or part of a bridle that was cut by ski edges. On other occasions, my race kite was unable to handle a gust and ended up doing a bow tie, making it difficult to untangle or unsafe in the backcountry.

I have learned that safety must be a top priority in terrain, even if I was looking for performance. For this, the right gear is critical.

Race kites are made to leverage the most upwind angle of attack with one primary objective: SPEED! The new registered race kites developed for the 2024 Paris Summer Olympics are certainly more stable in gusty wind than their predecessors. They perform beautifully on frozen water bodies or when using a hydrofoil on water. But in harsh complex mountain conditions, they become difficult to handle. Also, they require more maintenance than a non-dedicated race kite and tend to be quite expensive. 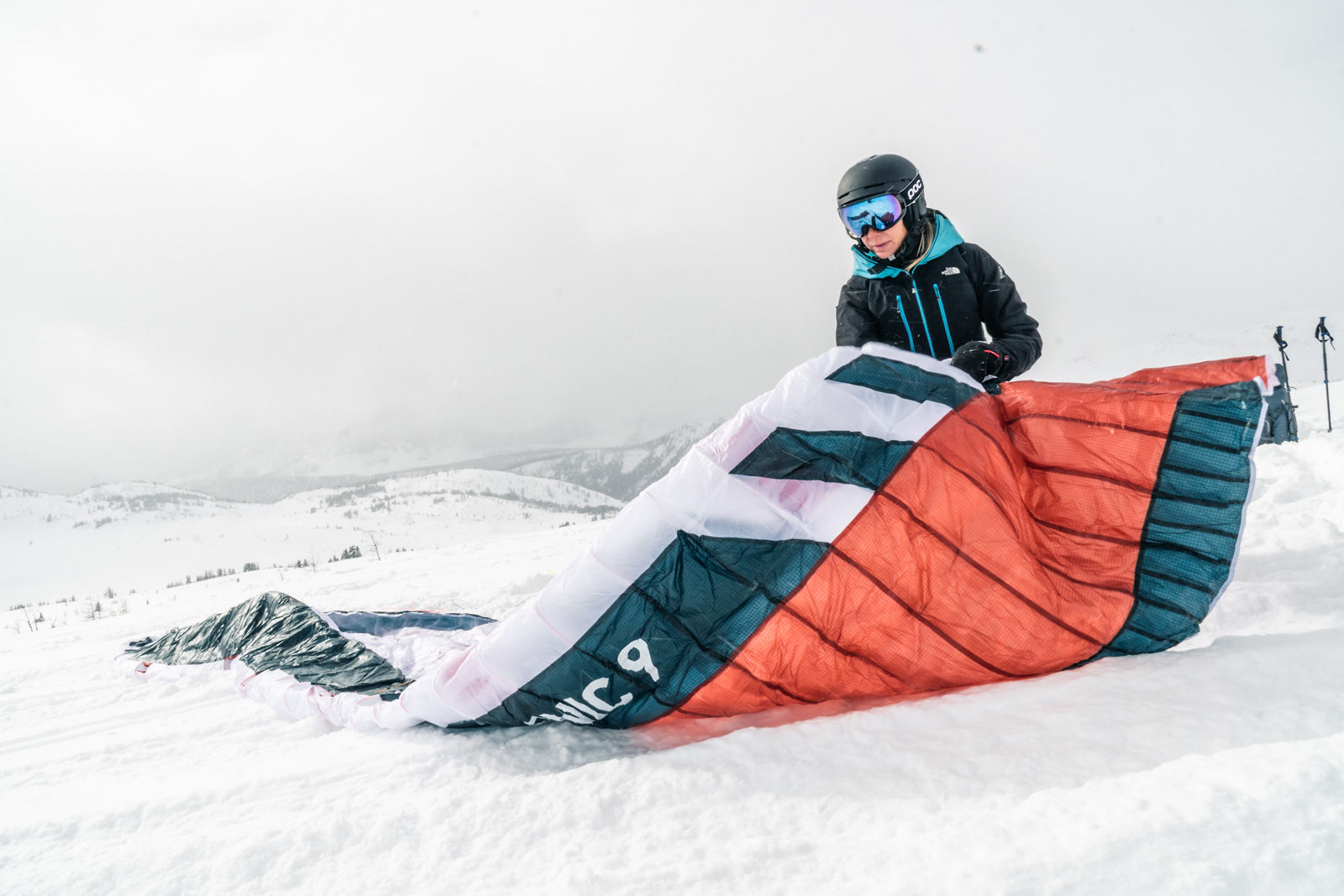 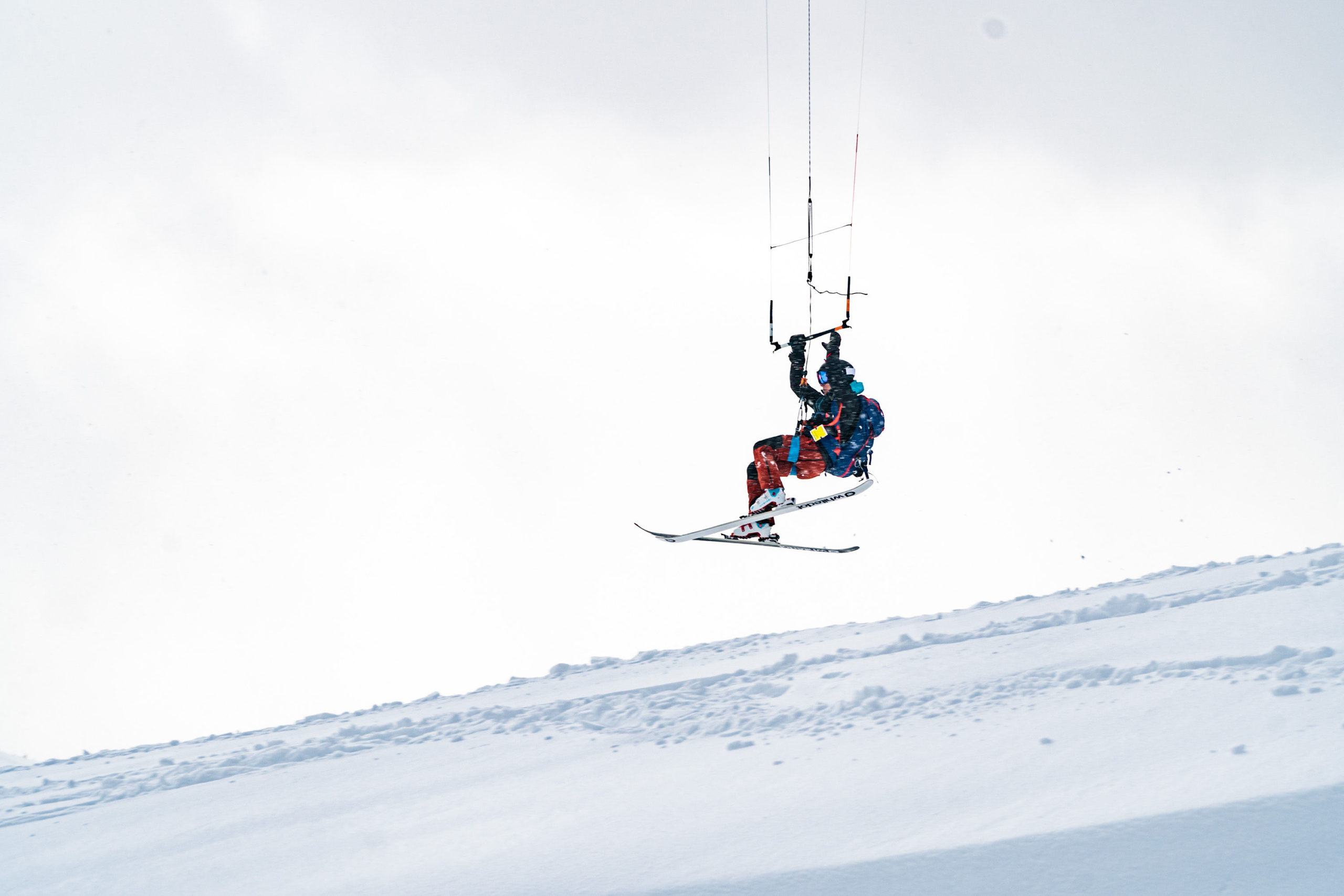 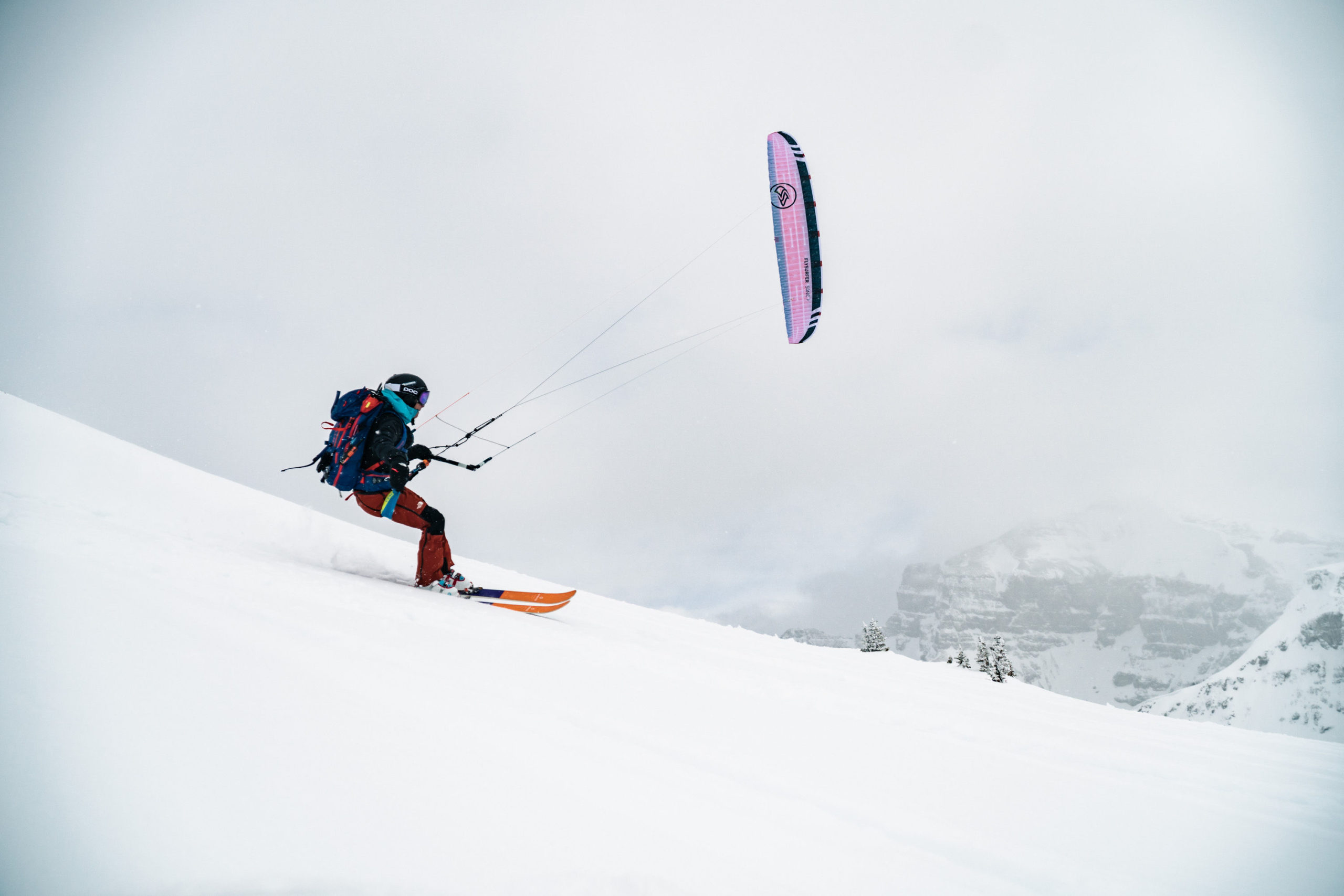 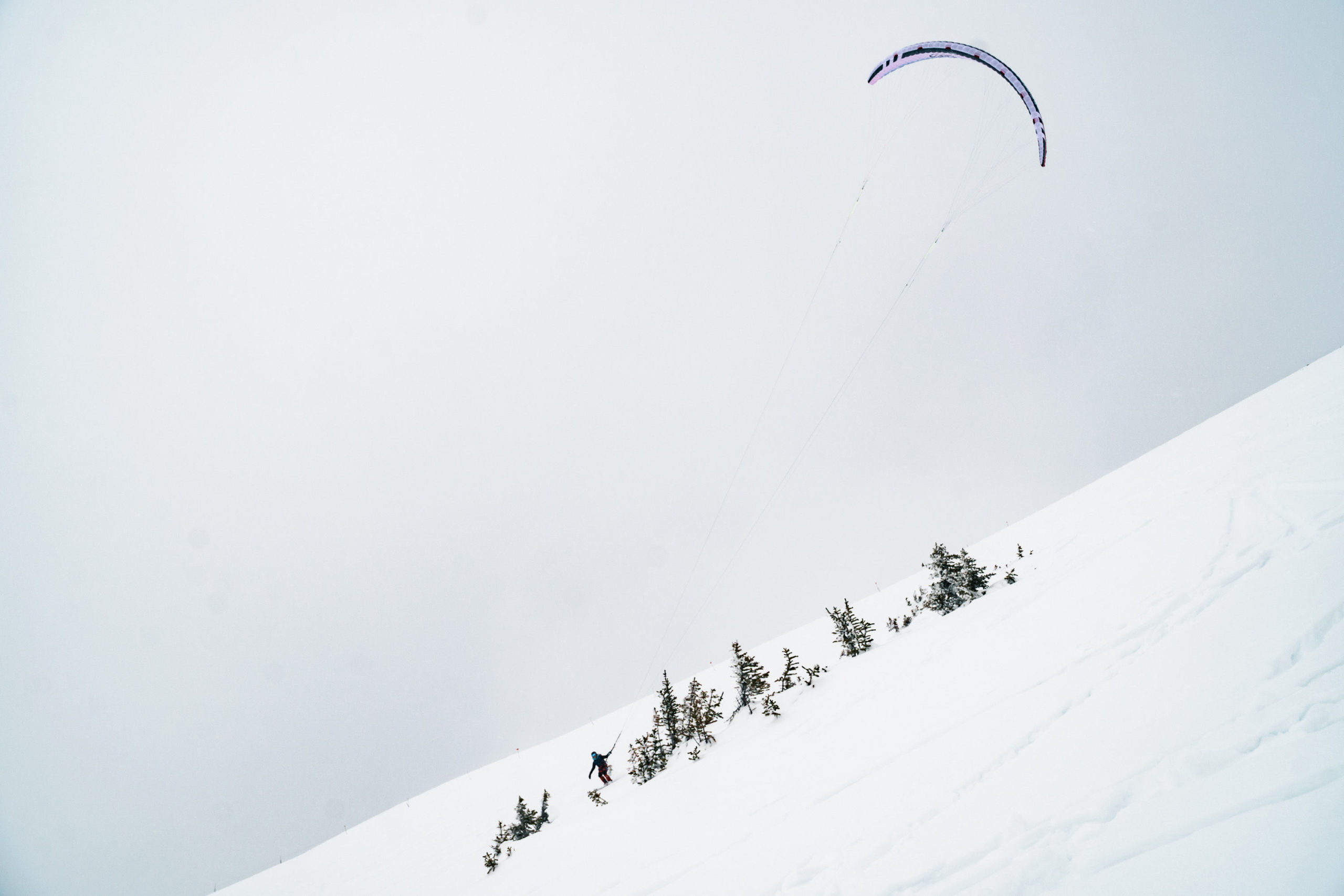 SONIC ON THE SNOW – MY WEAPON OF CHOICE

I started using the FLYSURFER SONIC3 on snow just before its official launch in early 2020. On my first ride, I was impressed with its performance. The influence of the FLYSURFER SOUL & VMG was clear in its stability, quick inflation, ease of use, ability to keep a superb upwind angle of attack (based on the VMG profile), and speed and acceleration.

My first jump on the SONIC3 was exhilarating. I felt I was going to stay in the air forever and just keep ascending! The incredibly smooth landing gave me enough time to place my skis properly on the ground without worrying about losing one.  I couldn’t stop smiling– it’s truly an addictive kite! 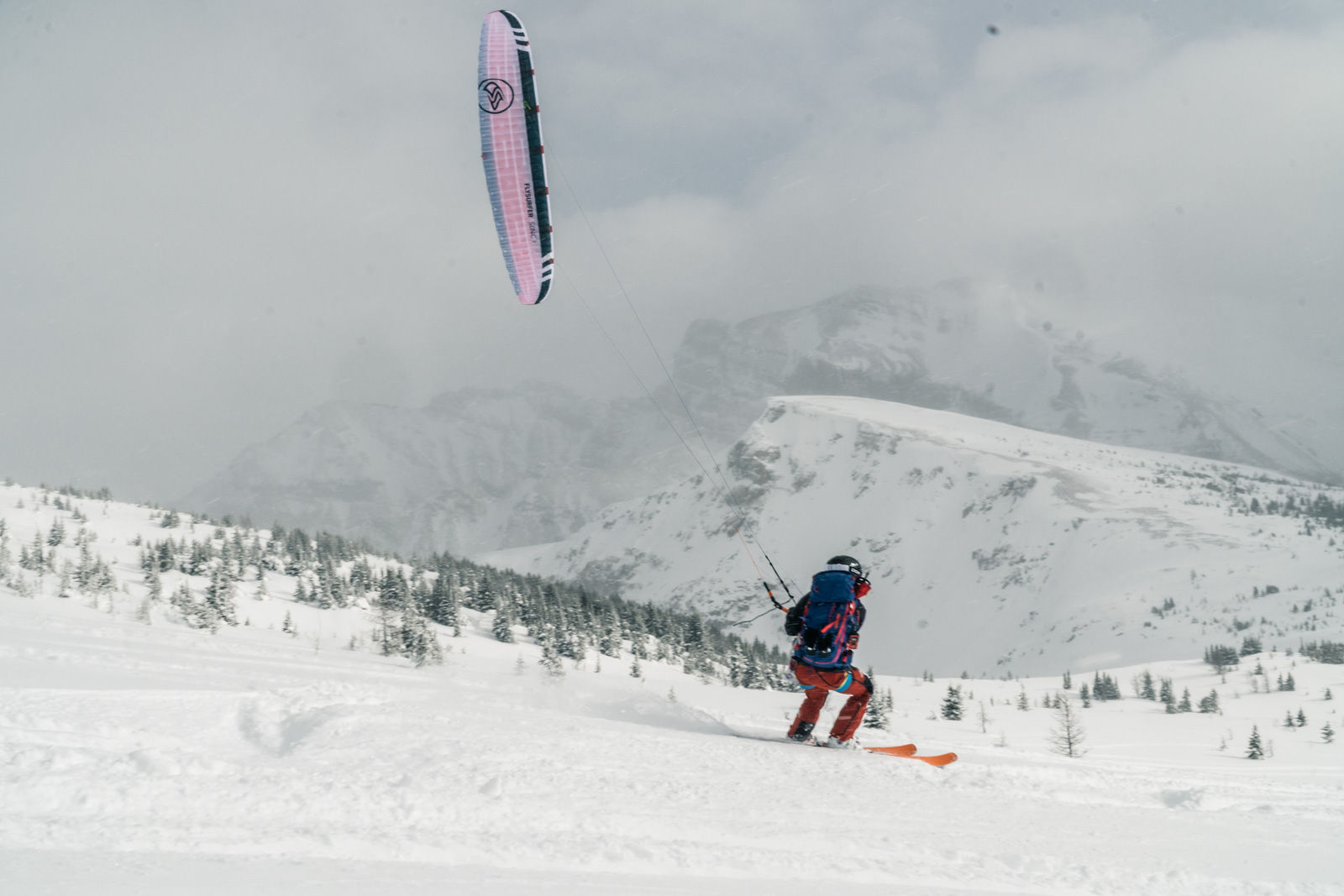 THE SONIC3 ON WATER

My very first hydrofoil race was on the SONIC3. I am still learning how to tack and jibe efficiently. Past experiences of messing up with my race kites on the water made me nervous, especially in the heat of a competition. The SONIC3 gave me more confidence for my first regatta as I knew the kite well and would be able to manage it in any weather and water condition.

My first jumps on the water using the SONIC3 were pure bliss –amazing lift, surprisingly long hang times, and stability that allowed me to do back rolls and front rolls with my hydrofoil. Even if it drops into the water, I have been able to relaunch it from there (except the one time when the wind completely died).

Even though the kite is not registered for the Olympics, it is still a good alternative for friendly races. 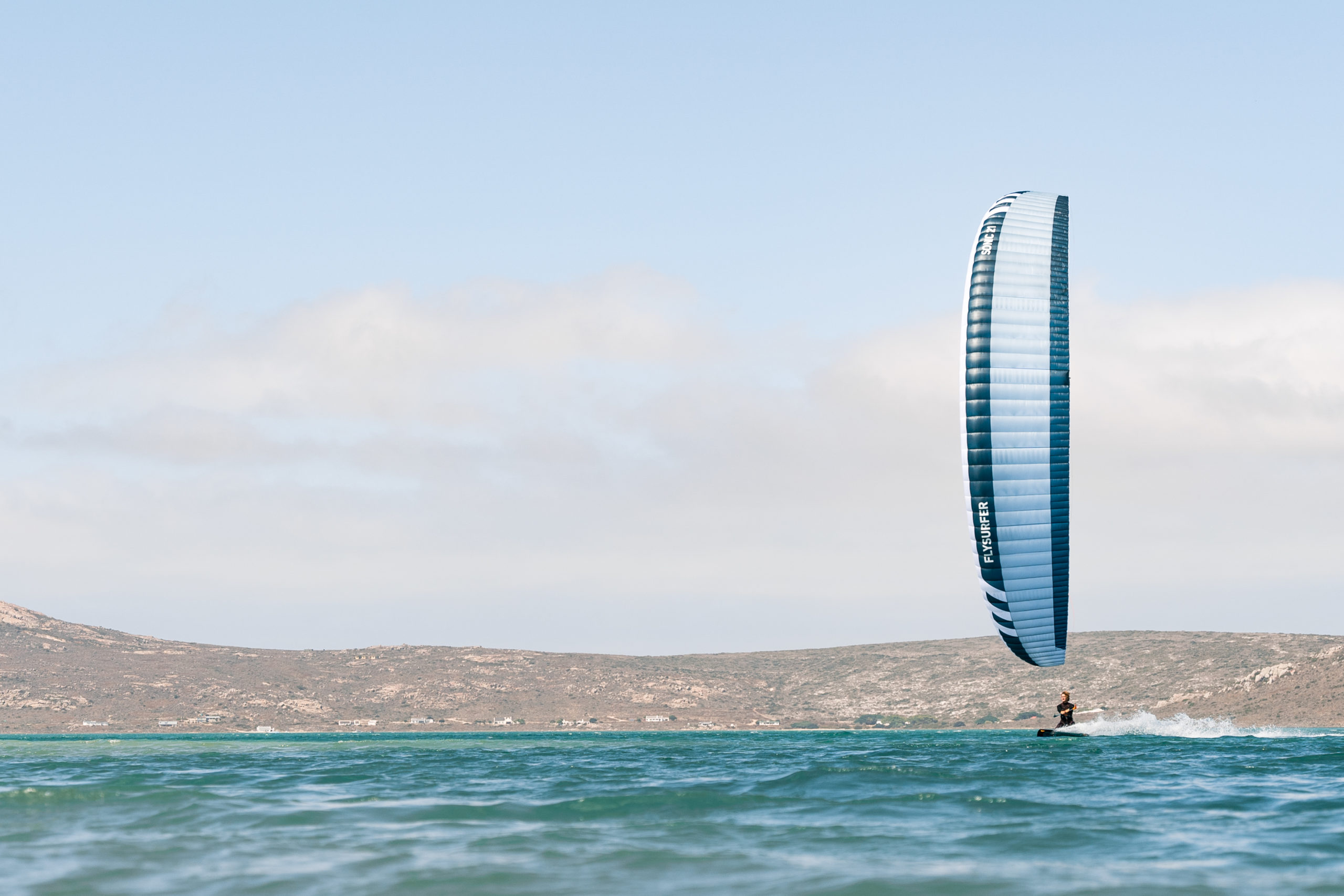 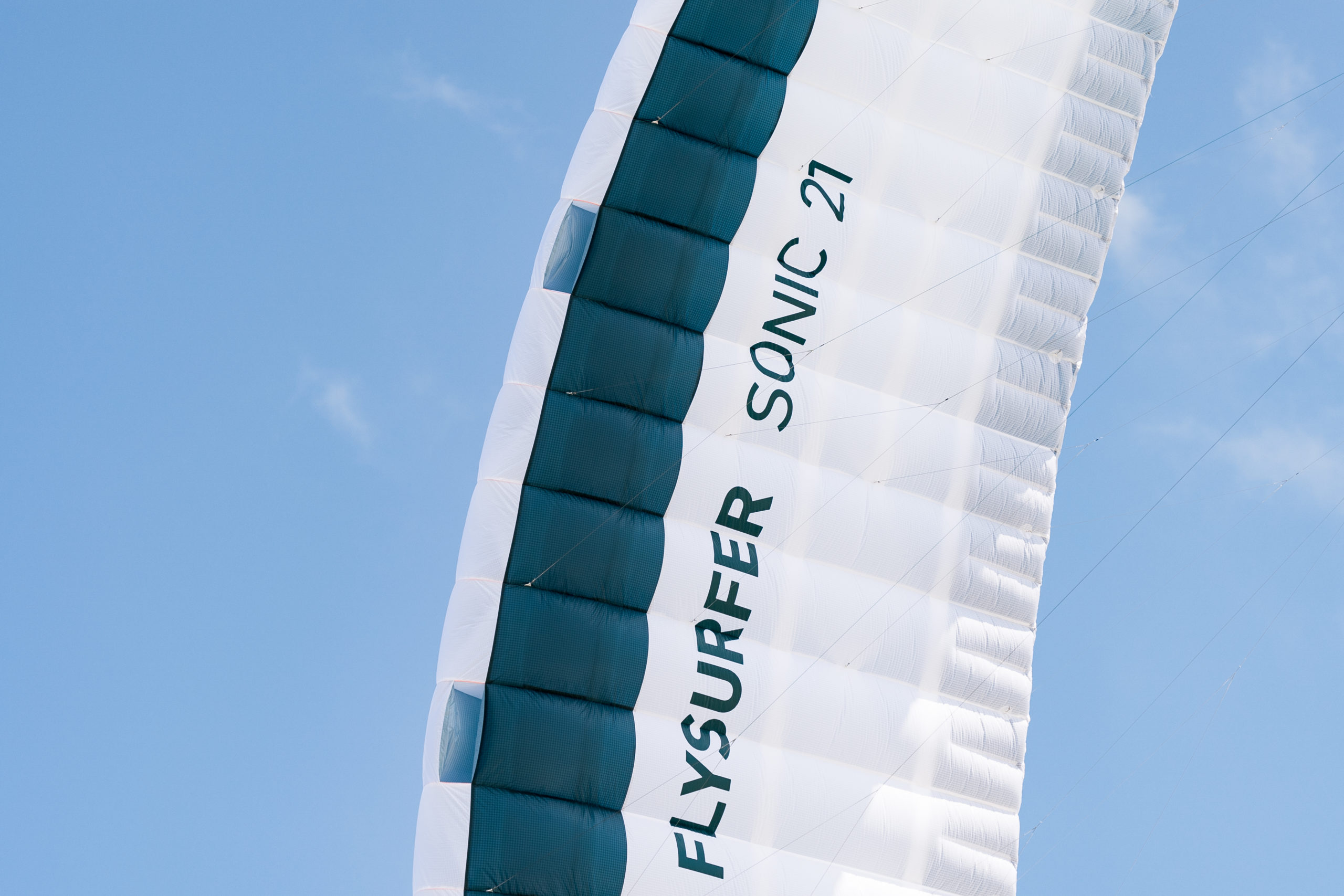 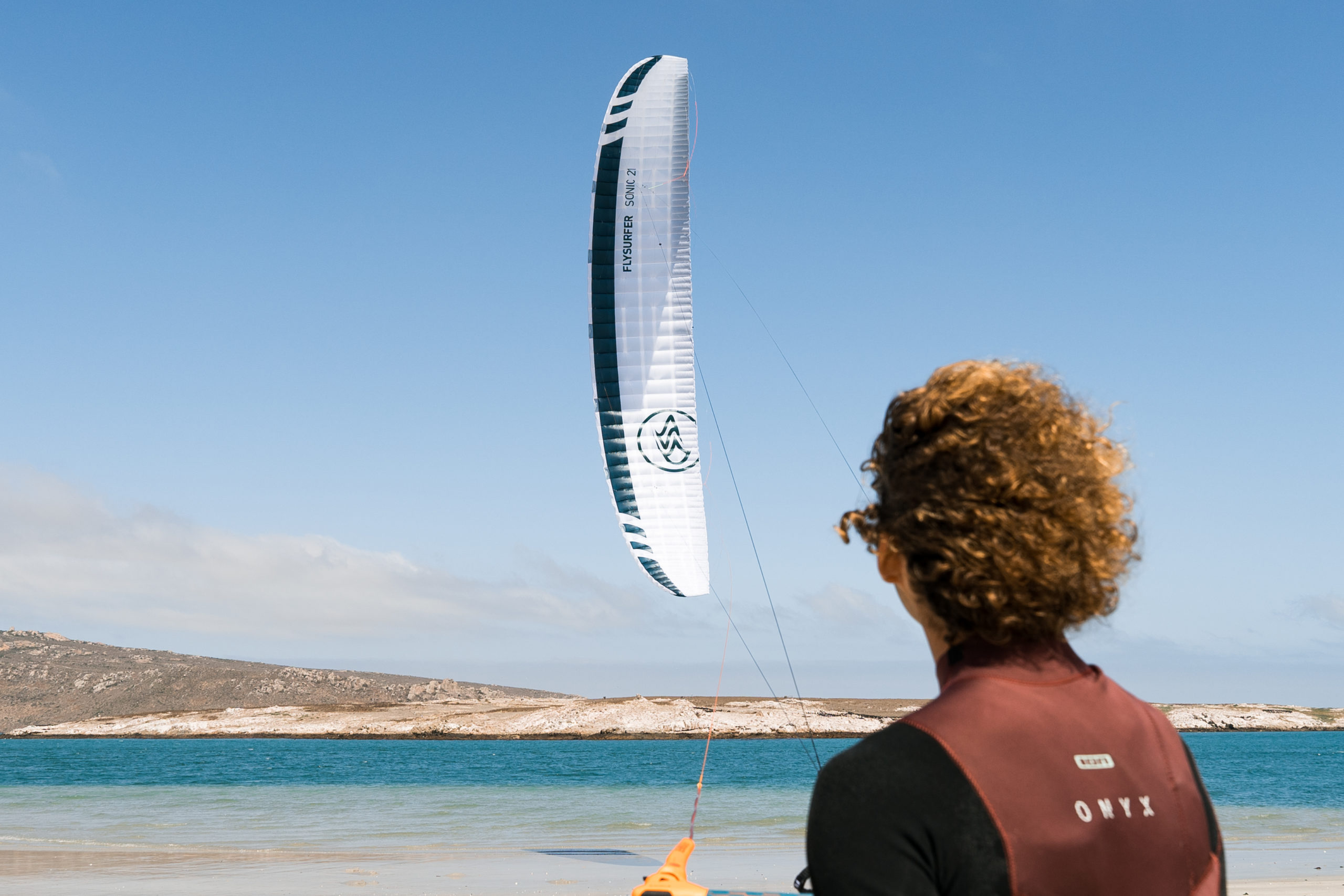 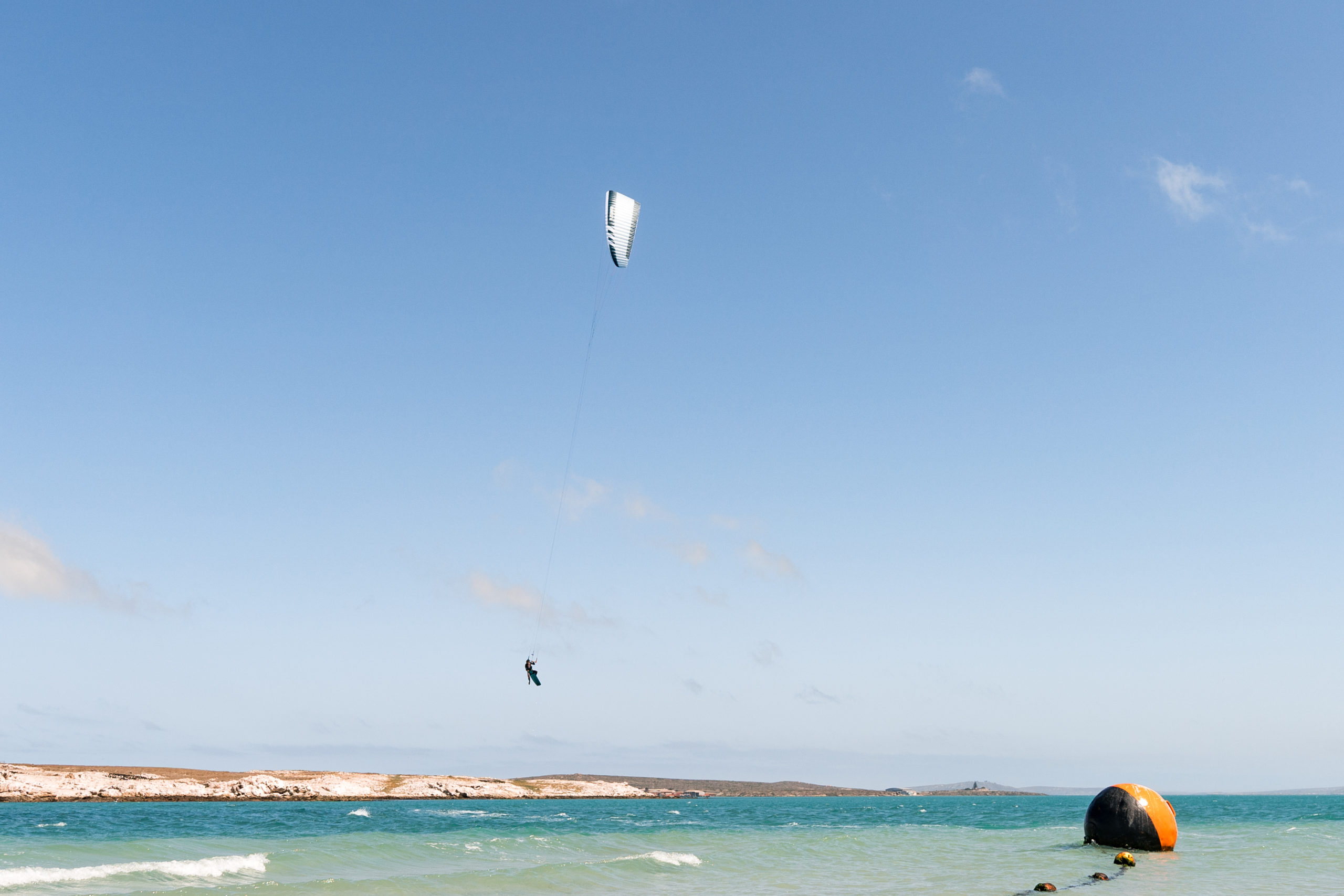 Overall, I find this kite sporty and fun, and I can never seem to get enough time on it. I would strongly recommend all passionate kiters experienced with foil kite to try out the SONIC3 at their local dealer. It will be an exciting experience! 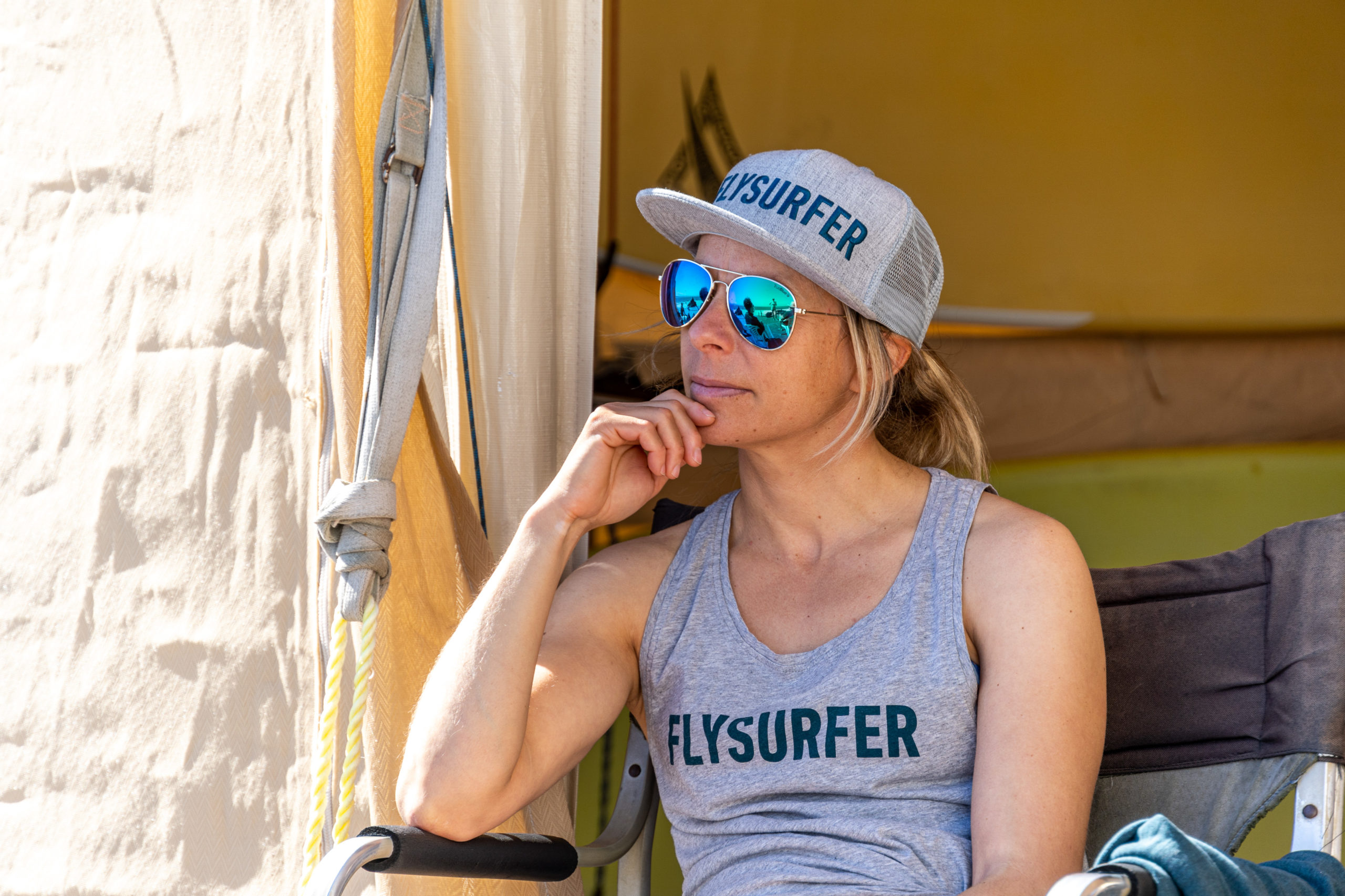