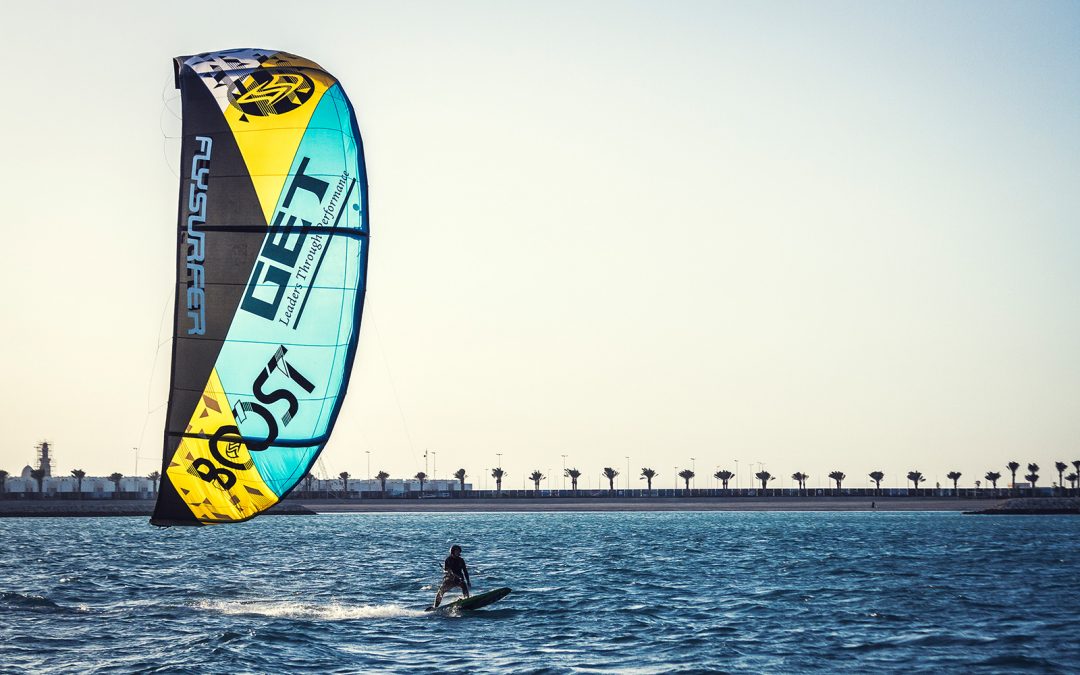 The GET Kite Mission, a continuation of my project ‘Kitesurf Arabia’, was a trip I had been planning for an entire year. Needless to say, I was, am, and always will be addicted to the ocean. So after circumnavigating Bahrain in 2014, I felt like I wanted more, I wanted to find limits and see what it takes to break through them. I wanted to be out there, experience the endlessness and wanted a new project to support ‘Wings for Life’!

I chose Bahrain as the starting point as I know the island and the weather well, after living in the kingdom for almost 6 years. The winds in the region come in sets of 2-4 windy days called the shamal which occur mainly with temperature and season changes, during spring and summer. As the summer here is unbearably hot, spring was the best time to plan such an attempt of crossing the Persian Gulf. I picked March, as this is normally the windiest month with constant winds and still cooler temperatures.

After talking to others and experiencing the darkness on the ocean first hand, during a new moon boat trip, it was clear that we should choose the full moon period for the crossing. Riding into the darkness with no possibility to make out the horizon makes you feel as if you would drive into a black hole. Through the physical strain and the rising fatigue, I could see how this could throw you off your game quite easily. 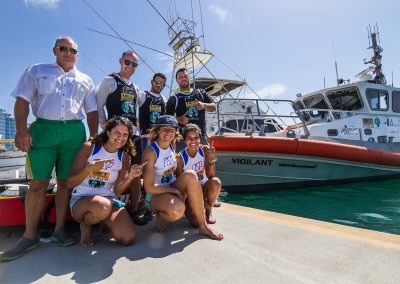 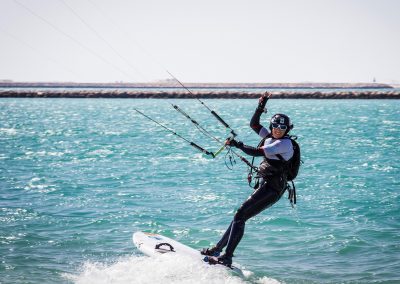 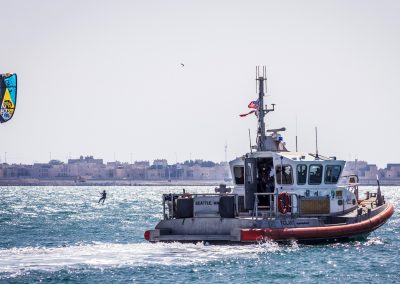 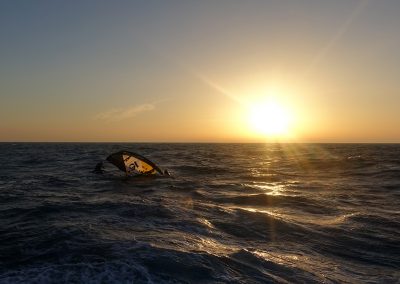 The first waiting period was set from March 14th to March 30th. With a 15m Boost, we set sail on March 17 at 4pm (GMT+3) from Amwaj Islands. It was a trip full of unknowns and despite the best possible preparation- being physically in top form and taking expert advice based on previous attempted missions, every trip is different and not everything goes according to plan. This, for me, is the beauty of Mother Nature and the challenge in itself!

We managed to safely navigate throughout the night, kited along a route that has never been attempted, withstood strong currents and wind-shifts and managed to set a new record being 17h at sea on our trip to Doha, Qatar. We saw the wind was great but with a strong front moving in. These fronts were very unpredictable lately and for safety reasons, we decided to set ourselves targets to stay ahead of this front.

The first sectors of our journey went very well with great progress! However, these were followed by calm periods that resulted in over 2h of stagnation and an incident that lead to a man over board, a quick release of the kite and tangled lines and knots, which cost us even more time. It was a hazy sunrise and the boat was in front of me surrounded by birds and cloaked by shades of light pink and blue. I had just kited from dusk till dawn. Filled with a warm, tingly feeling tears of joy filled my eyes, making me think of and thank my dad, an old sea salt, who must have gifted me the love for the ocean.

As we continued, I started to see buildings coming up on the horizon. I knew something was going on. We had lost a lot of time along the way and I also knew that we had agreed on a point where we had to make the call- whether or not the boat could continue. Just before Doha, the team broke the news to me. We had to stop. 17h in and just under 300km later it was over for the boat! The wind forecast was 32knots and more. Sadly I had no way of continuing by myself. If there had been one option to do so, I would have gone alone. I was not done yet.

A new waiting period and turn of events

In the following weeks, many team meetings took place to see what options would be available to try again. We were now under great budget and time constraints.

Along the talks, BISS Marine owner Nabeel Hijris, introduced me to Captain Rob Jones, the captain of a medium-size sea rescue boat named ‘Vigilant’ which was managed by Kvichak Marine. This was exactly the boat we needed, one that would be able to follow me anywhere and I was sure that it would live up to its name. This was a leap in the right direction, we had not only found the perfect vessel, but Kvichak Marine was also onboard and agreed to support us. We were able to set a new waiting period from April 15th to April 30th. 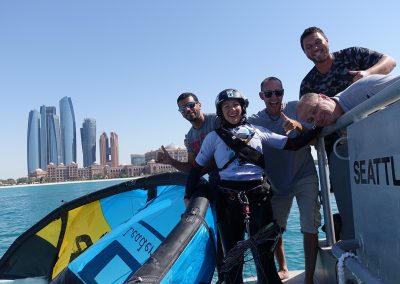 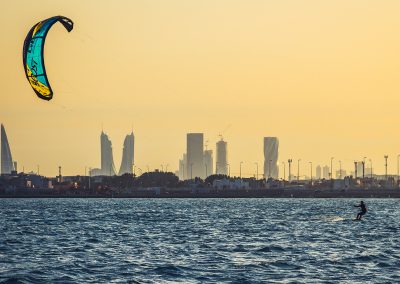 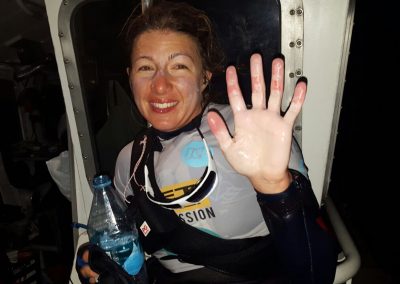 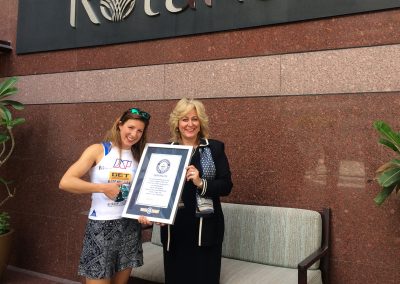 We were very lucky to have good wind forecasted for the 17th of April. Ready for our rollercoaster ride of a 24h trip. I was excited to face the challenge again and willing to dare my limits. Just before 3pm local time (GMT+3) the 15m Boost was up in the air again and away we went.

This time, very early into the mission we ran into problems when the kite got washed down by a wave and crashed and the safety light got caught in the bridals. It was only with the help of a fellow kite-surfer onboard the support boat, Yousif, that this could be untangled. It took over 2.5h to get sorted out as new problems, knots and line tangles emerged. One issue lead to another and I even managed to get my hand stuck in the lines with the kite powering up massively. Only a slight miracle saved me from needing to cut the lines. I went through moments when I thought this trip would be over before we even started.

Just after sunset, the kite was finally up in the air again. The steering lines however were crossed once through the middle lines. This is how I continued the remaining 27h, with crossed lines. I did not want to take another risk to get them sorted in the dark. What a challenge!

The night was clear with a bright moon and light winds as expected but we had wind all night long. Dawn broke, and a big dark orange ball was rising clearly out of the ocean horizon, an absolutely breath-taking view. Unfortunately, I lost my TomTom Bandit camera and with it some magical pictures. The day went on with a mean cramp in my foot, loosing the boat twic and a ripped food strap. I came across many poisons sea snakes and passed islands that had me wonder if these islands were hallucination or not. But most of the times there was nothing- just beautiful, peaceful endlessness, big waves , the wind and I.

As the trip went on and was a lot longer than anticipated, we had to change plans to assure food, fuel and batteries would last until we reached Abu Dhabi. However, as we exchanged food just after darkness, the tide changed and the wind stopped. The kite fell out of the sky. Someone turned the switch and that was it.

The boat had to turn around for me and found me 15min later, floating in the water with the kite down. Sitting in Abu Dhabi waters, almost at the Emirates Palace and with no wind forecasted, we had to call it a day. After 491km, 30.33h on the water and more than 2500USD raised, with bleeding fingers I rolled up the lines and deflated the kite.

I cannot explain how much I have enjoyed these two trips. I have learned so much about my body, Mother Nature and myself in the past year and during those trips. We made it! I was amazed, happy, tired and filled with gratitude I collapsed on the boat for a nap on the way to immigration!